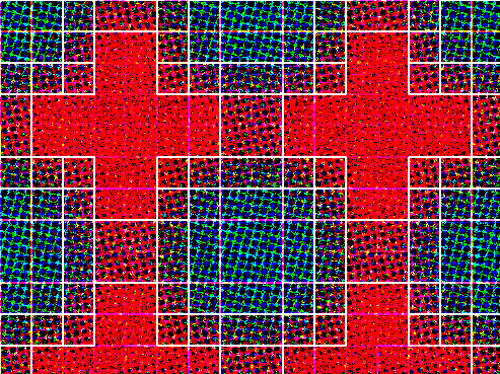 It is sometimes necessary to find the distribution given a sample set from that distribution. If we do not know anything about the distribution, we cannot recover it exactly, so here we look at ways of finding a (discrete) approximation.

I will cover the case for 2D sets here, but the ideas are easily extended to any dimension.

Visual Inspection From a Scatter Plot

The easy way to estimate the distribution is to simply look at a scatter plot of the samples.

If the distribution is simple, we can often “guess” suitable parameters for a mathematical function. But this method is not suitable when more accuracy is required. And obviously this method does not work for higher dimensions.

I always use a visual inspection as a first step when using the other methods described here. First, it allows you to decide which approach to use. Second, it serves as a rough benchmark to test the results of a better method against.

Averaging Over a Grid

Typically, we choose a cell size large enough so that all cells contain a few points.

It is possible to use different cell sizes, so that regions of higher density has more cells, for instance, by using a quad tree. However, this approach makes it difficult to interpret the values (they should be scaled down by a factor of the area they represent), and to generate random numbers from this distribution. I can’t really imagine a situation where this approach will be preferred above using a regular grid or convolution.

There are two ways to implement convolution. The first should be used when the sample set is small relative to the size of the domain, otherwise the second method will be more efficient.

Generate a very granular empty grid over the domain.

For each point p in the sample set,

The neighbourhood is typically a circle or a square. The number you add can be the same for all neighbours (in which case any positive number will do), or it can be scaled depending on the distance from p.

The size of the neighbourhood depends on the density of your sample. In general, the denser it is, the smaller the neighbourhood can be. Smaller neighbourhoods lead to faster execution. To prevent “holes” in the approximation, use a radius that corresponds to the maximum of the distances between a point and its closest neighbour.

Generate a very granular empty grid over the domain.

For each point p in the sample set, map p to the grid (calculate the coordinates x,y of p in the grid), and add one to that location in the grid.

Now choose a square, symmetrical convolution matrix, and perform a discrete convolution on the grid:

Here the i, j go over the indices of the convolution matrix. (Normally, the convolution is defined as new_grid[i, j] = sum_{i,j} grid[n – i][n – j] * c[i][j]. However, since we are suing a symmetrical matrix, these definitions are equivalent, and we need not perform the extra calculation).

The convolution can be a square or circle of 1s, or be filled with numbers that grow smaller outwards. These correspond to the three neighbourhoods described for the sparse convolution.

Note that the new_grid is larger than the original by one less than the size of the convolution matrix in each dimension. The centre of the new grid corresponds with the original grid.

There is an example of implementation in 2D in with the Python Image Code. See the file random_distributions_demo.py.