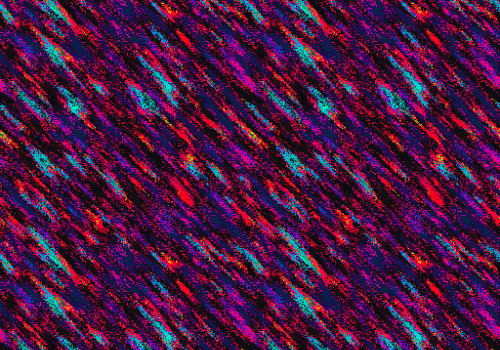 I am playing around with generating textures and decided to post some preliminary results. The algorithm used to create these images is simple to implement, but slow. Here is how it works:

Start off with white noise (grayscale only – colour is much too slow).

Generate a new image from the old one. Every pixel in the new image is a blend between the corresponding pixel in the other image, and a randomly selected pixel in a square window around that pixel. Every point in that window can be selected with a probability that is defined in a square matrix.

Repeat the above step. The more you repeat, the smoother the result is. The images below were created by repeating the step 50 times. On my computer, generating a 128 by 128 tile takes about 10 minutes (Python implementation).

Normalise the image, and map to a gradient.

Some example textures are shown above.

There are some things that I still want to investigate:

The code is currently too messy to release. I have built it on top of the code that was released for the Quadtrees article, so that is a good starting point if you do not want to wait. Otherwise, keep an eye out, I should post some code soon.